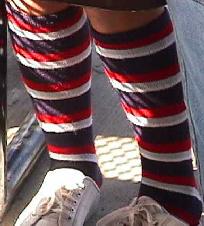 My Dell used to suck

and why it no longer does!

The most reliable of these was the IBM (now Lenovo) laptop, that continues to work after 6 or 7 years of 100% reliable service.

The Compaq and HP desktops are new units but have worked perfectly.

The HP UWXGA laptop has performed heroically in a brutal "100% utilization" environment, with just an AC power adaptor failure (no doubt due to the maximum power drain of a 3.2gHz loaded machine running flat out for months at a time).

Which brings me to my Dell.

Have I mentioned that my Dell sucks? Well it does. In fact it always has.

But there is something worse than owning a Dell that sucks. Dealing with Dell support.

I noticed my first Dell issue within hours of turning it on. Some application, that I have yet to isolate, insists on trying to load (twice a day) a non-existent file called "Timer.txt". It also loads every time I reboot my Dell. I've never seen this weirdness on any other computer I've owned or worked on. A full search of my Dell's hard drive did not find any occurrences of "timer.txt" inside a program file and this issue continues to this day (almost one year!)

Ok, so what you say. Me too. In fact I simply created "c:\documents and settings\floyd\timer.txt" (i.e. the file it was unsuccessfully trying to load) and then set my computer to load an empty timer.txt into Notepad. Since I run with 2 Notepad sessions at all times this became just a way to load notepad on startup, i.e. no big deal. But sucky just the same.

My second Dell issue concerns the USB ports. 5 USB 2 ports on the back and 2 on the front, and I normally use most of them -- (1) USB hub for wireless keyboard, (2) USB mouse, (3) USB 3-speakers system, (4) external USB DVD+RW drive (as Dell wanted too much for the internal one, so I went with just the default internal DVD-ROM), and (5) USB hard drive.

My USB problem is that some of these USB devices disconnect or hiccup. If I plug a 6th device (e.g. a D'zign DV-5 DivX-format camera) and try to copy files from it, it will disconnect ALL of my other USB devices. The DV-5 works fine on my HP computers. Another hiccup comes when I try to dub video files. If the files are larger than about 150MB, the process may fail. A third USB issue happens when I connect an Optorite 4GB hard drive USB "key" drive -- part of the way through transferring files the drive will get disconnected.

Once again I worked around these problems, using my other computers to transfer camera files, reconnecting the Optorite drive (again and again) to finish the file transfers and finding other ways to dub files.

First the symptoms. When a hard drive starts to fail (is that bad?), modern operating systems like XP (or for example Novell Netware) try to work around the situation by retrying failed reads or writes. The problem is that hard drive failure is so serious an issue that operating systems will understandably make it priority number one and other programs/operations will suffer performance problems or worse (or even worse).

Computers normally do a good job of faking "multi tasking" but NMI (non-maskable interrupts) rain on that parade. In short, the system starts to behave very badly with one of the most obvious symptoms being that audio playback gets corrupted. Instead of a nice crisp clear "ding" or the soothing tones from your media player, you get the sounds of a 1950s Hallicrafter short wave radio on a rainy night.

I worked around the sound corruption issue by moving my audio files to an external USB hard drive. Not a mission critical problem, but certainly enough to alert someone with my level of experience that the hard drive was soon to be toast.

The workarounds get messy

Other symptoms when a hard drive starts to fail are more serious and harder to work around. For example, virtual memory swaps start to fail -- your system pops up a message saying it failed writing to your hard drive and the event gets logged by Windows. If you subsequently load up the Event Viewer you can see each and every failure event as a bright red "stop sign" icon. I soon had about eight hundred of these.

I worked around the virtual memory errors by disabling virtual memory. I had 1 gigabyte of RAM so I could afford to do this. The average user has 256 to 512MB of RAM and could not do this without creating other problems.

The third issue got me calling Dell, as I mentioned, and then the REAL problems began. The incompetent foreign workers pretending to be Dell support people actually challenged me when I told them I saw all those red stop signs in Microsoft's Event Viewer. They wanted to know why I was even loading that program. I said, "Ah, because I know what I'm doing."

They then asked me to reboot the computer and do a boot up integrity test. A trivial affair, this simply checked that the hard drive was basically ok. It did not involve checking every single byte of the disk and naturally it didn't find the failed hard drive sectors. Manually running chkdsk.exe fixed "one or more problems". Super duper but I thought the drive was fine...

Thank you for calling Dell support

The support session lasted several hours and was completely futile. I dealt with first level support people. And supervisor "Steve". Who got upset when I called his staff incompetent. He even tried to claim that I had said some inappropriate words. I asked him which words. He mentioned the word "incompetent" and informed me that since all calls were logged this could get his people in trouble. I said "Yes it could. And they are."

After that completely useless support session, I decided it was easier to put up with my Dell suckage issues than to talk to Dell "support". Two months went by.

Late December, 2005, and my telephone rings. A Dell sales rep. asking me if I want to renew my Dell "support" that expires in 2 weeks. I say, "No, but I want to register a complaint". He gives me the number to call and I complain. Then I foolishly try to go through the Dell "support" system again.

This time the supervisor's name is Maverick. Eye roll. After they suggest the usual useless things, I try a new approach. I ask them what they would do if I was an 85 year old pensioner whose computer "wasn't working". Wouldn't they just send a technician? The short answer, apparently, is no. They wanted to do that trivial start up test again and I refused. Then they informed me there was a way to actually test each byte of the drive. I try the new test.

Reboot computer, press a key, get the diagnostic menu and run tests. Everything tests A-OK. Fantastic! (Except things aren't ok, of course). The phone call and tests have wasted another 3 hours of my life.

They promise to phone back when the test is done and end up phoning back half way through. I tell them how far I am in the tests and they say they will phone back again. They never do.

Suspecting more bogus "test" software, I decide to exam the testing parameters. This turns out to be an ordeal in itself. The software presents a Windows like appearance but informs you that your mouse is disabled at the start of the test. There is no obvious way to do anything but run tests. Nor any obvious way of viewing parameters or altering them.

Various bizarre combinations of ALT, SPACE, TAB and ENTER lead me to the test parameter screen. As I suspected, the test default is to ignore all "soft" errors. Oh the sweet subtlety of that word.

A "soft" error is an error that the operating system traps and tries to fix itself. In short, the HARDware failing can generate a SOFT error that you the stupid little piece of crap user will NOT be told about.

Your sucky Dell will lie to you. Because if it didn't it could cost Dell money.

I set the tests to their proper settings and run them again, and this time both my wife and I notice the change in sounds as the system retries numerous areas of the hard drive. Those retries being for "soft" errors. Errors that are making my computer unstable and sucky.

Astonishingly, at the end of this latest battery of tests, the Dell system diagnostics do NOT report these soft errors. Once again it briefly announces "Test OK".

So that is why my Dell used to suck. Read on to find out why it doesn't any longer.

[May 20, 2006] Recent additional hard drive corruptions mean that I can no longer bring up Device Manager, and when I tried to attach a wired keyboard (a normally trivial affair) it was not recognized.

[May 30, 2006] A week after I wrote that update, I got an email out of the blue from, of all places, Dell. An apparently sincere technician (from the good ol' U.S. of A.) promising to straighten things out and can he get my permission to call me! He calls the next business day, we chat, and a new drive is apparently on its way. If/when it arrives I'll post a final "P.S." and maybe change the title on this page to "My Dell used to suck..."

[June 12, 2006] I have a new working hard drive! The real Dell techie was true to his word and at last I am impressed with Dell support. He sent a replacement drive that I was able to reinstall XP onto via the recovery DVD -- and no "timer.txt" nonsense after the install. He also is making things worth my while by sending me an external USB backup drive (since I found out from him that this computer can not, in fact, support two internal hard drives, despite what it said on Dell's web site). By the way, those Optorite disconnects appear to be related to its internal hard drive getting too hot and shutting down for safety reasons.

[February 18, 2007] A year after Dell shipped their replacement drive, I read the following result of Google's definitive test of the failure rates of their hard drives.

...after their first scan error, [hard] drives
are 39 times more likely to fail
within 60 days than drives
with no such errors